Now that’s what I’m talking about!

I actually think last week was a fluke. Normally, I weigh myself in my basement, on the cement floor, because that’s where my exercise equipment is. I recently moved my scale to my bathroom and, when I weighed myself this morning, it initially said 323.6 lbs, which meant another almost 4 lb gain.

I was baffled. I could not understand what was going on and why I was gaining weight like crazy, despite eating well and exercising. However, I noticed the teeniest little wobble on the scale. Following a hunch, I moved it to the kitchen and, lo and behold, the scale revealed 313.5 lbs when I weighed myself. I weighed myself four more times just to make sure it wasn’t a fluke. So, I’m guessing that my bathroom floor is just the tiniest bit uneven. I can’t go back in time to weigh myself last week, but I’m assuming that the reported weight gain wasn’t accurate. However, no matter, it’s all fixed now!

I also made an amazing discovery this week. Last Saturday (April 23rd) I went axe throwing with some friends (which is awesome, by the way!) and afterwards, we went out to a restaurant called Boston Pizza to eat. Boston Pizza is a Canadian-only chain, I believe. Anyway, while I love BP’s (as it is affectionately called), there is not a lot on their menu that isn’t extremely high in calories and fat. At least that’s what I thought, until I checked out some of the foods on the Weight Watchers app. (FYI: I recently rejoined Weight Watchers. It’s not a perfect program, by any means, but they have changed it a lot in the past year and I think it’s the best it’s ever been, now it takes more information into account to really help WW members to make the healthiest choices, unlike on the last program, when a can of Coca-Cola and a cup of chocolate milk were the same points value.)

Anyway, there is a pizza from Boston Pizza that I absolutely love, called the Spicy Perogy pizza. It’s basically cheese, sour cream, bacon, green onions and spicy potatoes. I live in Alberta, which has a huge Ukrainian population, so I’ve grown up eating perogies and I’m obsessed. A normal individual-sized one of these pizzas would run you 26 points. To put that in context, I have 54 points per day. So, basically, half of my daily points on one little pizza. However, in the app, I learned that simply by making this pizza thin crust, it suddenly drops down to 15 points. It’s still a lot in the course of a day, sure, but it means that when I go out with my friends to BP’s, as happens often, I have a much healthier choice available to me than almost anything else on the menu, and I can enjoy one of my favourite foods without feeling guilty. That was an amazing feeling.

I’ve been walking a lot (30 minutes a day, 5 days a week usually), which feels great, I am really enjoying it. I’m hoping to start incorporating weights into my routine this week, then swimming, because I adore swimming. It’s been really gorgeous here, Alberta has had a very nice spring, so it’s nice to get outside. I’m feeling good.

I’m baffled, to say the least. I went for a 30 minute walk every single day this week. I wore a pedometer. I made really good food choices.

Could I have gained muscle? It’s possible, I know that’s one reason why someone’s weight can initially go up when they start working out, but it’s not possible to gain almost 5 lbs of muscle, in a week, just by walking. I can only assume that my body just went into shock, since I’ve been sedentary for so long, and tried to hold onto the fat or something like that. Same reason why people plateau.

Anyway, I don’t know, but I’m trying not to worry about it. I was active this week and that is the most important thing.Onwards and upwards. 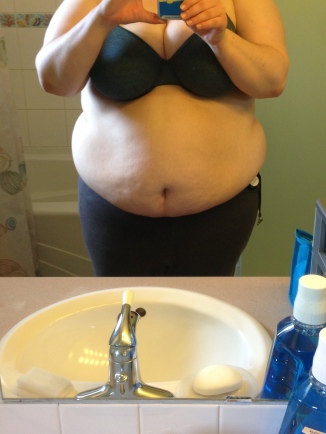 Oops, I did it again! Missed a few weeks, I mean. It’s been kind of crazy around here, actually. Just a lot of things going on and I have caught the spring cleaning bug, so I’m crossing things off my To Do list like crazy. A great feeling!

I started my weight loss program and it makes me really excited. I’ve mentioned it before but, just to recap, the program is called Why Wait? and it’s designed for people who are trying to lose weight but can’t seem to do it alone. I was referred to it by my doctor, who was concerned. The program is six months long. You are assigned a coach – either a nurse or a dietitian – that you meet with initially, then for the next six months. You are required to take several classes on nutrition, emotional eating, exercise etc. and then you’re assigned a personal trainer who helps you to get an exercise routine and teaches you proper form with body-weight exercises and how to use the weight machines and all of that. The classes have been excellent so far, I’ve learned a lot.

I’ve also started wearing a pedometer. One of the things that stood out to me the most from my classes was that weight honestly does not matter. It doesn’t. It is more important to get 150 minutes of moderate exercise a week and to limit the amount of time you spend sitting than to lose weight. This blew my mind. I want to lose weight for aesthetic purposes, but an obese or overweight person who gets 150 minutes of exercise a week is actually less likely to get cardiovascular disease than someone of normal weight who doesn’t exercise. Seriously. People always go on and on about “fat is bad” but really, inactivity is worse. So anyway, I’m wearing a pedometer now to track my steps. I’ve also started walking a lunch with a coworker, we usually walk about half an hour every day. It’s lovely to get out of the office because the weather here is beautiful now, plus it means that I get at least some activity in my day, regardless of how busy I am after work.

Lastly, I am back on Weight Watchers. They had a really good deal recently where you can save a bunch of money (more than $100) by signing up for six months in advance. I am not 100% on board with Weight Watchers BUT they have changed their program for 2016 and I think it’s more scientifically sound now, plus it’s still a good way for me to keep track of what I’m eating and be aware of what I’m putting in my body.